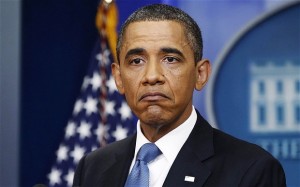 Apparently the president of the United States cannot be held responsible for your late tax return. Photo: Reuter

Think you might miss the January 31 deadline for online tax returns? You’d better come up with a decent excuse if you want to avoid picking up a fine.

HM Revenue and Customs has released its annual list of the 10 worst excuses people have given for filing or paying their tax return late. Unsurprisingly, none of these led to a successful appeal.

If you miss the deadline you can appeal to HMRC against some penalties as long as you have a “reasonable excuse” for filing or paying late.

HMRC said this is normally something unexpected or outside your control such as your partner died shortly before the tax return or payment deadline, you had an unexpected stay in hospital that prevented you from dealing with your tax affairs or your computer failed when you were preparing your online return. It said service issues with HMRC’s website, a serious fire or postal delays may also be acceptable reasons.

But the taxman said it is unlikely to class bounced cheques, insufficient funds, difficulty using the online system or the lack of a reminder letter as reasonable excuses.

Ruth Owen, HMRC director general of personal tax, said: “People can have a genuine excuse for missing a tax deadline, but owning a pet with a taste for HMRC envelopes isn’t one of them.”

The deadline for 2013/14 paper returns passed on October 31, so all outstanding returns must now be submitted online. To do this you must be registered for HMRC Online Services. This involves getting an HMRC Activation Code which can take up to 10 days to receive in the post.

HMRC issues an automatic fixed penalty of £100 for all late returns.

If your tax return is three months late HMRC will start charging daily penalties of £10 per day for a period of up to 90 days – so up to £900 in total. After six months HMRC will charge a penalty of 5pc of the tax due or £300 – whichever is higher.

“Within six months you could be facing total penalties of at least £1,300,” Mr Shah said. “The penalties start to become even more serious if your tax return is more than 12 months late and can be as much as 200pc of the tax. In addition HMRC will charge daily interest at 3pc.”

But be prepared for a long wait – average waiting times doubled to 10 minutes and 53 seconds in September compared to the same time last year, the latest figures show. Waiting times in the lead up to this month’s deadline are expected to be much longer.